The photographs below were taken during a laminate inspection that took place in Orlando, Florida.

The floating floor was installed throughout a two-story residence. The home had a concrete subfloor on the lower level, and plywood on the upper level.

The affected boards slid back and forth, when kicked. This would result in one gap becoming closed, but another gap would open up at the other end of the board. Sometimes, laminate gaps can become wide enough that the underlayment is visible between the boards.

Separating at the Butt Joints

The image below shows three end gaps. The complaint on this floor inspection was “end joint separation”. These three separations (or gaps) were not as large as the gap in the above picture. The gaps, however, were located throughout the entire laminate installation. Here’s a picture from a different inspection. This is a bamboo laminate floor, with end joint gaps throughout the living room: The boards in this picture are affected by small end joint gaps: This laminate floor was installed in a small town in central Washington state. The complaint was that boards were shrinking, and coming loose at the ends. Our inspector found end joint gaps (as depicted in the image below), as well as delamination. The picture below shows a relatively large gap between the ends of two laminate boards. One of the boards has a chip. While laminate chips can be caused by various factors, this particular chip happened because an improper tapping tool was used during the installation. This laminate gap is between the short ends of two boards, and measures approximately 1/8”. It was one of 36 gaps in a 700 square foot installation. Here is a picture of a side joint gap between two laminate planks: The picture below illustrates a gap along the long sides. This gap isn’t very wide, but notice how it extends across more than one adjacent board. Here is a picture of a larger side joint gap: 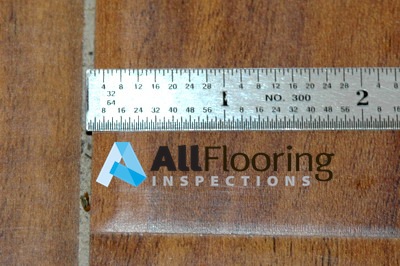